One of the best things about hiking upon a spectacularly beautiful trail is that it is spectacularly beautiful. One of the not best things is … you never really get to see the entire panaroma of the hike and amazing trail! So, after trying to get a perfect shot through the thick morning fog and failing, and after failing to get a nice view from Lafayette, and even after failing to get it from down in the park, and after failing upon a wonderful (brisk little one too) hike up Mount Pemigewasset, I did what any reasonable person would do …

I went in for some old time mountain kitsch, headed into Lincoln and stopped at a neat old mountain resort that is right out of the 1950s vacation guidebooks by the name of Indian Head “resort” … and by all means it was a pleasant place, immediately accented with a gift shop stuffed in every cubic inch with, obviously, memorabilia and trinkets from the great native american tribes from … out west. Be that as it may, there was still plenty of White Mountain schtuff in there too. But the coolest part of the place was that it built an old lookout tower with those pay per view binoculars on top, and there was like a $1.00 charge to walk through the turnstile out into the tower. You had to, of course, go into the gift shop to secure the token that operated the turnstile, but it was one of the best dollars I have ever spent. In any case, once up there, if you hold your hands up high enough over the railings and viewers, you can get a pretty decent view looking north up the Franconia Ridge, which includes the entire range trail plus a couple others. From closest on the crop on the picture on the right we have Flume, moving north and to the left of the frame we have Liberty and then continuing up the range we have Little Haystack, then Lincoln and then peering itself up over the back, about 20% from the left of the picture is the tallest in the range, Mount Lafayette. The Notch actually separates Lafayette in this picture from the wall of mountains you see to the left, which includes Cannon, and the old site of the Old Man.

so, onto the actual hike. I had a hockey clinic to attend in Concord, NH over the weekend of the 23-24, so when it looked like the weather would be nice I booked a campsite at the Lafayette Campground in Franconia Notch SP and tried to get as much hiking in for the two days prior to the event as I could. I highly recommend the SP campground, it sits along the Pemi River and Pemi Trail and the park has a great many attractions running the 8 mile chute from the Flume up to Cannon. There is an awesome paved bike trail (it is steep and hilly, but awesome) that connects the entire park, and a cool footpath running alongside it. So if you are in the mood not to have a car, you could set up shop here and do a ton of exploring on foot and bike including reasonable hikes to two AMC huts, several lakes, a pile of 4,000 foot peaks on each side of the Notch, and some really cool geologic features such as the Basin.

The night before the hike of the Ridge, was able to get over to Crawford Notch visitors center (again with no lack of places to explore and views to indulge) and had a really pretty hike up to Mount Willard, which affords you a south facing view of the valley running south from the Presidentials and some neat in your face mountain views. It was a pretty warmup for the day before. If you only have a couple of hours, this a nice little hike to do, and it leaves right from the visitors center / train station in Crawford just passed the Mount Washington Hotel.

For the Ridge hike, I wanted to get up fairly early so we could spend as much time up above treeline as possible and really enjoy the long sunlight. It happened to be the first day of summer, which in addition to being solstice, also happened to be this day. Fortunately I did not get any empirical evidence that this designation was fitting. The plan was to hike the old bridle patah trail from the campground, hit the Greenleaf trail and then on to Lafayette. From Lafayette, you walk the range above treeline (it’s better than advertised) southward to Lincoln then Little Haystack. Now, at that point folks usually make a loop right back to Lafayette campground via the Falling Waters trail. But the ridge runs much farther (it’s on the larger Pemi Loop), and so since the weather was so perfect, it made absolute perfect sense to walk over to Liberty and then Flume, and you are handsomely rewarded for doing so.  After making the way over to Flume (the walk is quicker than the mileage, despite the ups and downs), you can decide to stay on the Pemi Loop and walk the slow and long descent back to Lincoln Woods – but then you need a ride back somewhere, or you can go down the Flume slide (I chose not to do that since I had not read enough on it and I suspected it was wet, even though it was a very dry day out), or you can walk back to Liberty and head down the Liberty Springs trail (part of the AT) back into the Notch and then walk the 2.5 miles along the Pemi River back up to the campground – that is the route I chose in part because I was curious to see the AT encampment just west of the Liberty summit, and also because going back to Liberty was a fun walk and the views from Liberty were exemplary. All in all, if you were hustling, this is a very, very doable hike in very doable time. I wanted to hike all day.

Got my start at 6:05 from the old bridle path trailhead, and was standing on a totally socked in, fogged and freezing and very windy summit of Lafayette just 2 hours later even though it was 4 miles and about 3,500 of climbing. It was good footing (not really like the ADKs thankfully), and despite the quick ascent above the thick forest, you just want to keep walking and walking around the great horseshoe to Lafayette. With a stop for water at the Greenleaf Hut (folks inside were having a very emphatic role-playing game on impact and how to handle litter and litterers, so I sat on porch enjoying the setting), was on the top by 8:00. I huddled very cold up top for 40 minutes or so hoping for the thick fog to blow over so I could see over into the Pemi wilderness or into the Notch, but that was not happening, even though you felt at any moment that the fog was ready to burn off (it would). I wore a short and long sleeve shirt for the hike, and by time was on top added the fleece, some fleece gloves and a thick wool hat and was ready to add the wind layer, it was cold. I spent as much time enjoying the wildflowers and the cool way the fog and sun intermittently framed the views east and west. With plenty of time to savor the day, and lingering on the cool blocky ledges of Flume, and having a few fun conversations with other hikers, was back at my tent after 17 miles (I am estimating) and something greater than 5,000 feet of climbing by around 3pm.

Rather than give the blow-by-blow of the hike, I’ll just add a couple of impressions and a few pictures and leave it at that. My first impression is that the hike is as high in the reward to effort ratio as you will ever get on a good-sized hike. Within an hour of starting it you are emerging onto the big ledges and boulders, with Lafayette staring you in the face on the other side of a really cool looking horseshoe ridge, and you stay excited and rewarded for just about the rest of the day. I will say that while we all know about the huts, they nevertheless remain eminently jarring to encounter, especially as the weather is turning and the terrain real rugged. The Greenleaf Hut in peak season charges folks in the mid-$100s, which is fine, I understand they are expensive to run – but, well, I’ll be losing my capitalist credentials if I say too much more. In any case, the hut is a gorgeous cedar shingled oasis, and it is built well into the surrounding scenery – it just doesn’t seem to “fit.”

The hike from the hut quickly gets you above treeline and is less than an hour to the top of Lafayette, and is well marked by cairns along the way. The summit is marked by a trail intersection, and it is here that you first hit the AT as you begin your journey south. While there are ups and downs the rest of the way, most of the heavy climbing is by now out of the way, which is why I think so many folks seem to prefer hiking the trail in this direction rather than finishing on Lafayette, though I think I might like it better coming the other way. From Lafayette, you are on the trail you see in the pictures, a neat gravely narrow path narrowing off into the distant focal points. At no place is it really a knife’s edge, so if you are worried about exposures this is not the hike to be nervous about – go and enjoy it. I think the ridge between Lincoln and Little Haystack is marvelous, and the walk beyond Little Haystack and over to Liberty and Flume seems to me to be massively underappreciated – the walking is great, but both of those peaks are fantastic as well. In any other arrangement, each would be a much sought after destination on their own for the neat ledges and 360 degree views they offer, but seem to get lost in a sea of excellence up on the ridge.

I’ll keep the rest of my thoughts to myself – coming up here was glorious and well worth it, and surely makes one want to figure out a way to make it a much more regular part of one’s life. My kids would love the idea of it, and being plopped onto the top surely would have felt the magic, I just don’t think they have the passion to do it. I am to blame of course, but that’s for another post. In the meantime, some pics below.

6am start – it was warm down below 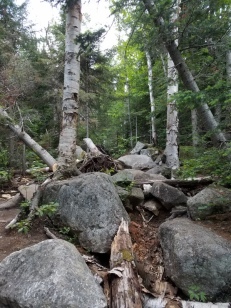 The trail down low

Emerging above trees on bridle path

Looping around the horseshoe to the Greenleaf trail 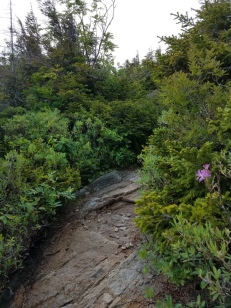 about 85 minutes to the hut, staff training and breakfast going on inside 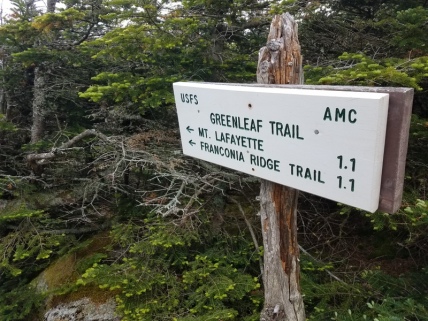 And then the cold, windy clouds rolled in

It’s colder than it looks up on Lafayette 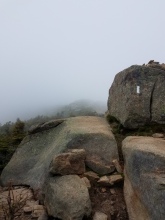 The Greenleaf trail hits the AT at the top of Lafayette, and the Franconia Ridge trail marches southward along spectacular ridge 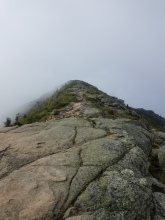 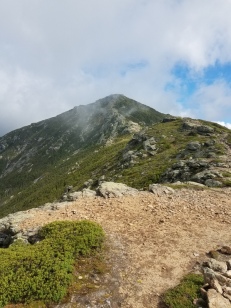 The old man was once near Cannon Mountain 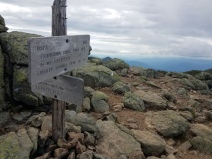 Little Haystack, Falling Waters trail would take you right back to campsite, but continued south for spectacular day 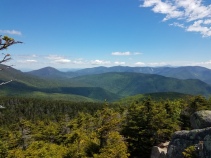 Garfield and Owls head in foreground, Bonds in back 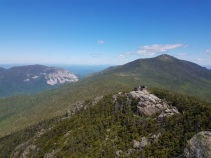 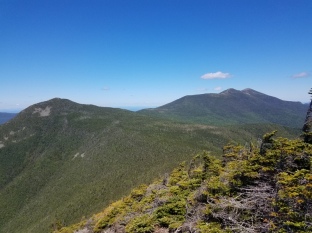 The ledgy seats on Flume

Poutine and an ale 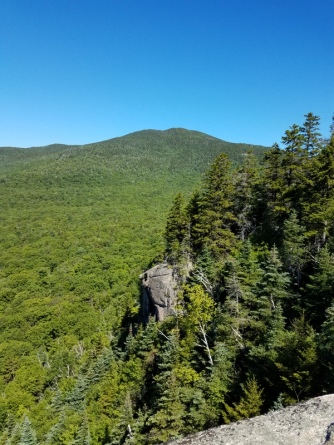 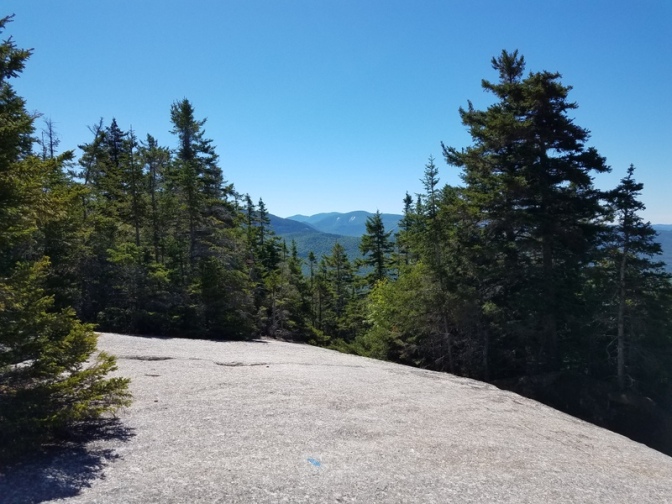